A Beginner's Guide to KubeCon

A beginner's guide towards what to expect in KubeCon

Well, folks, KubeCon NA 2022 is just a week away. All the folks attending in-persons have most likely started packing, some have probably even finished packing and are already in Detroit. With all the hype around KubeCon, this is a good time to understand why is it so hyped.

In this blog, I'll be covering everything you need to know about KubeCon, and how you can make the most out of it.

So first, let's understand a bit of backstory. There are certain projects such as Kubernetes, Argo CD, Circle CI, Prometheus, TestKube and the list goes on. Well, these projects are all classified as Cloud-Native Projects as they all work with deploying applications to the cloud, testing, monitoring the status of your cloud application ( that runs in a Kubernetes Cluster), and a lot more.

All these projects are grouped into a single organization called the Cloud Native Computing Foundation, or CNCF for short which is a part of the Linux Foundation. Remember that big landscape that looks so intimidating and has a lot of applications under it? Yeah, the one below. These are all the projects under the CNCF and more are being added every single day. 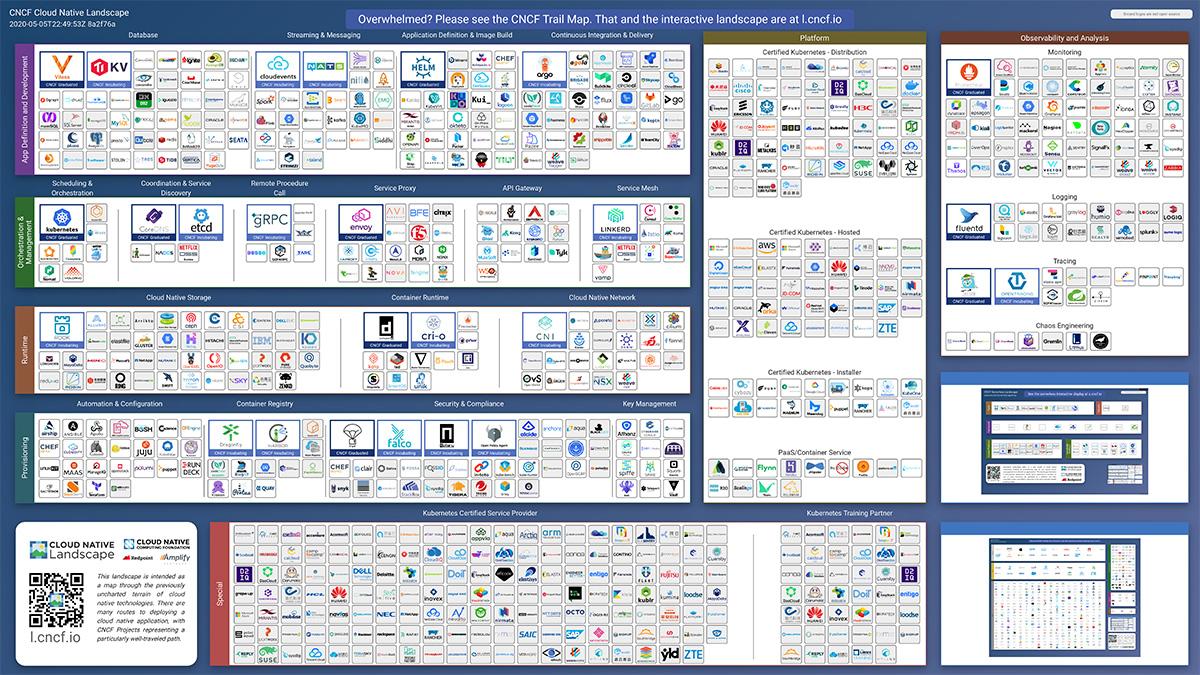 Let's talk about the big event. KubeCon -or as I like to think of it 'Kubernetes Con'- is the world's largest conference where Kubernetes developers and users gather for a week for fun and learning. If you ask what happens here, it's basically a big venue for everyone associated with Kubernetes to come together, introduces their projects, share tips for specific audiences, network, attend talks (or give them) and so much more. In a nutshell, it's a big conference where folks from all over the world come together to geek out about Kubernetes.

Why does Kubernetes need such a large conference which is held twice a year? That would be because of the sheer potential of Kubernetes. As you know (if you keep up with tech news) nearly everyone is shifting their software to the cloud. You can call Kubernetes the backbone of this, at least on the software side. Apart from just putting your application into containers, deploying pods, connecting databases, setting up services, and finally making your cluster public to access (Don't worry if you didn't get any of those techie terms) tons of third-party applications are being developed to enhance Kubernetes giving it useful features such as monitoring, testing, pod scheduling, adding a level of automation, handling all the dirty work of networking, managing, chaos engineering, and don't get me started on security.

Well, I'm guessing you can see now why it is such a big event. Also, PLEASE do not get intimidated by all these terms. To get started with Kubernetes, you need to know very basic stuff which is easy. The rest is just exploring and playing around with clusters. There are so many huge communities as well which are made specifically to help newcomers get started. KubeSimplify is one such Community.

How does it Happen?

Before 2020 -the year when everything changed- KubeCon was always an in-person(offline) event. In 2020 and 2021 KubeCon was completely virtual. This year it's going to be a hybrid model. Personally, I think this is a good change for several reasons. Let's get into the details in the below sections.

Ah yes, the in-person events. The times when folks used to venture out of their homes and gather together as groups. 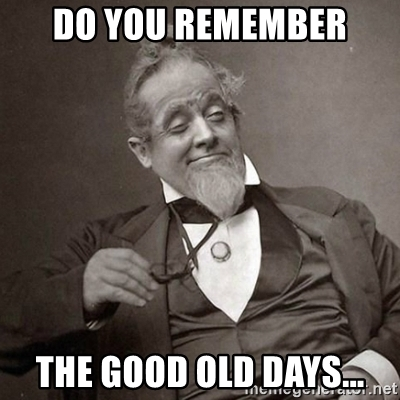 Anyways, In-person KubeCon is great for quite a few reasons. One of them is just getting the feeling of actually being at a big tech conference. Others are you meet tons of people, interact with them, attend talks together, and overall make some new friends who are also a part of the Cloud-Native Eco System.

Apart from that, there are also Sponsor Booths where you can go talk to folks from various organizations, learn about their tools, and tell them stuff you know and what you're using Kubernetes for. Chances are the sponsors will want to connect and work with you, hear your opinions on how their product can be improved, and eventually, you might even land a job with one of them.

There is a Scholarship as well for folks who want to attend KubeCon but cannot exactly fund their trip. It covers your ticket, travel, and staying expenses. The applications for KubeCon NA closed in August, but you can always keep an eye out for the scholarships for KubeCon EU next year.

If you're still thinking that KubeCon is not really all that big, just check out this picture from KubeCon 2019.

P.S. This entire section is from my experience at KubeCon EU which happened earlier this year. I couldn't find any articles about how the current hybrid format will be.

The virtual event on the other hand also has some of its benefits. To start with, some of the speakers who cannot attend in person for any reason can always stream their talk. If you apply for a KubeCon Scholarship, it is easier to get a Virtual Scholarship. If you are worried that you won't be able to network with folks, no worries. There is a slack channel where you can interact with other virtual attendees, and there is also a Match n Meet section where you can put in your experience level and stuff you are interested in and you can connect with someone with similar experience and interests.

There was also a point system where you were given some points based on your activity during KubeCon and you could win prizes based on your score. There were also Office Hours which were basically just Sponsor booths.

Here is what the Virtual platforms may look like. 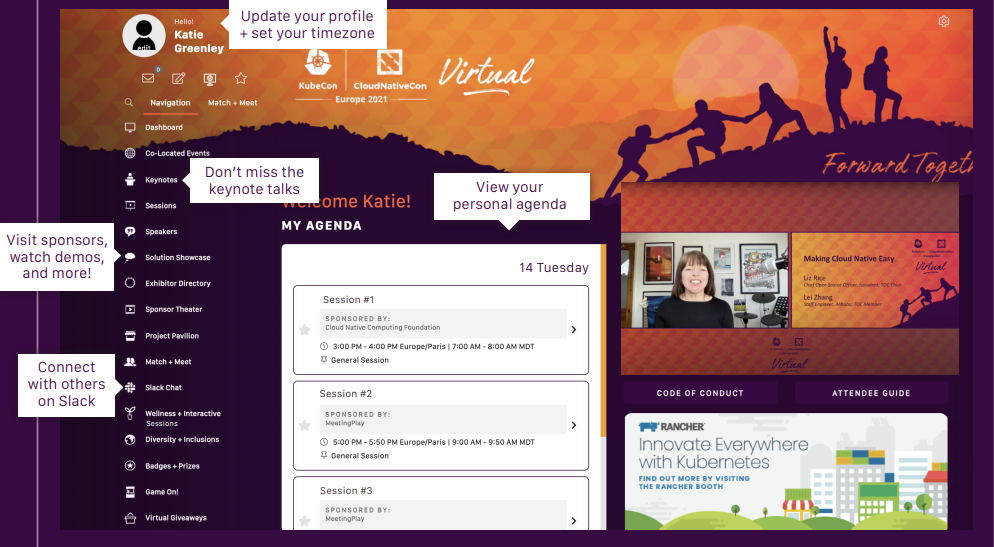 KubeCon has got 20+ Tracks that you can attend. Tracks are basically used to sort the sessions into the type of talk. For example, the 101 Track has got talks on the very basics of Kubernetes, CNCF, and other beginner-friendly stuff. I'll be talking about a few tracks in this blog, although if you want to see all the tracks you can check them out in the KubeCon schedule. 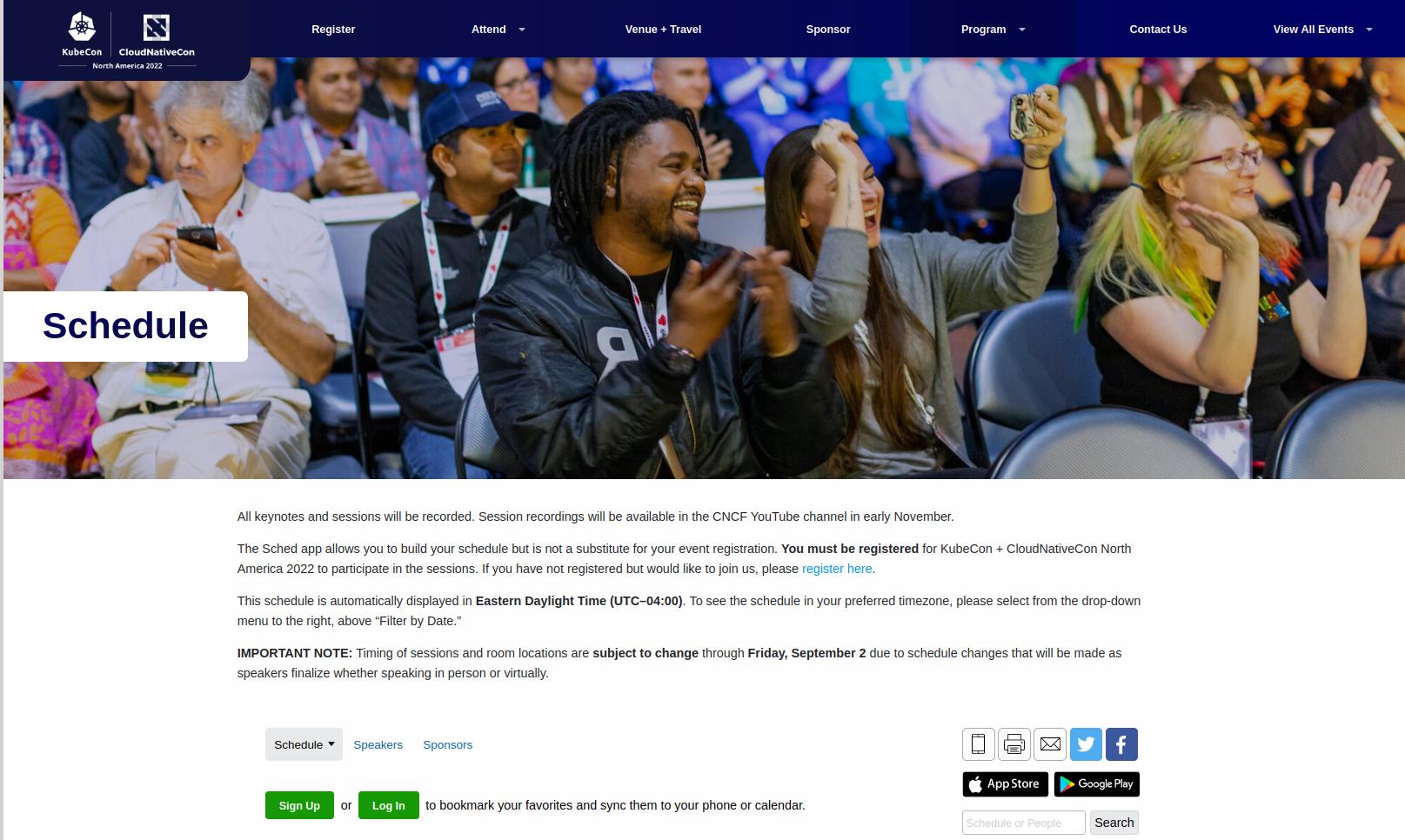 The Student Track is a great place to start with, as it has really great student-centric talks.

For example, take a look at this panel discussion where a group of students tell their entire journey from participating in multiple hackathons to eventually getting involved and contributing in the cloud-native ecosystem.

There is also a talk in the Student Track on the mentor-mentee relationship. Something this is important to know for training the next generation of cloud-native. Again, if you want to see the entire list of the talks check the schedule.

I know what you're thinking. "I can't see the Hallway Track in the Schedule. Is this even a real thing?" I assure you it's quite real and is present at any big event.

You know how during big events you have to keep moving from one room to another for different talks. While moving around you unintentionally eavesdrop on someone's conversation and you start going like "Oh I am interested in that, That's exactly what I'm doing right now!" and you approach them and ask if you could join in the conversation. Eventually, you make new friends and realize they are heading to the same places you are so you decide to go together.

That became quite a story, but that's basically what the Hallway Track is. Networking while heading to a different conference hall. I'm not sure how this will be done virtually this year, but let's wait and see. 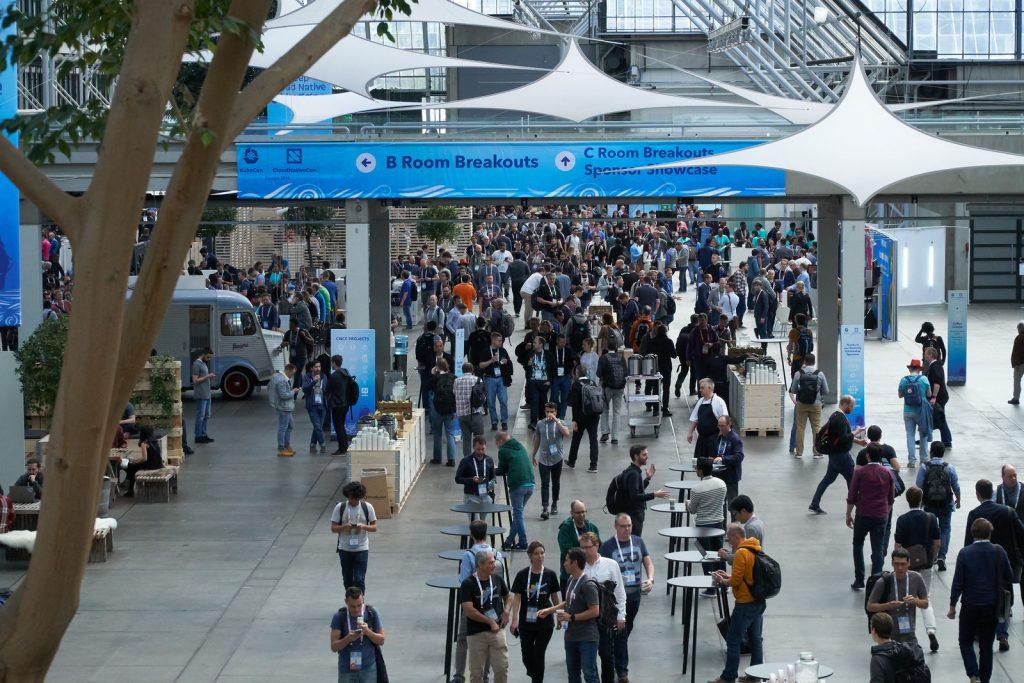 This is the track where there are talks on using Kubernetes from a business point of view. These talks focus on how various startups and tools are using and optimizing Kubernetes. I highly recommend checking the talks on How to build a distributed system (and should you?) and Consumers to contributors: Open Source as a competitive advantage.

Again, you can see all the talks and add them to your calendar from the schedule.

Now I mentioned in the beginning that Kubernetes has a lot of tools made for it. Of course, these tools would have a track of their own. The maintainer track is where various project maintainers give a talk about their respective tools, what they do, their future roadmaps, demos, and more.

There are more than 50+ tools talks you can attend. You can either learn about a completely new tool, hear about existing tools you're using, or get a deep dive into a tool you've wanted to try for a while. Regardless of what you already know, this is a great track to add more tools to your toolkit. 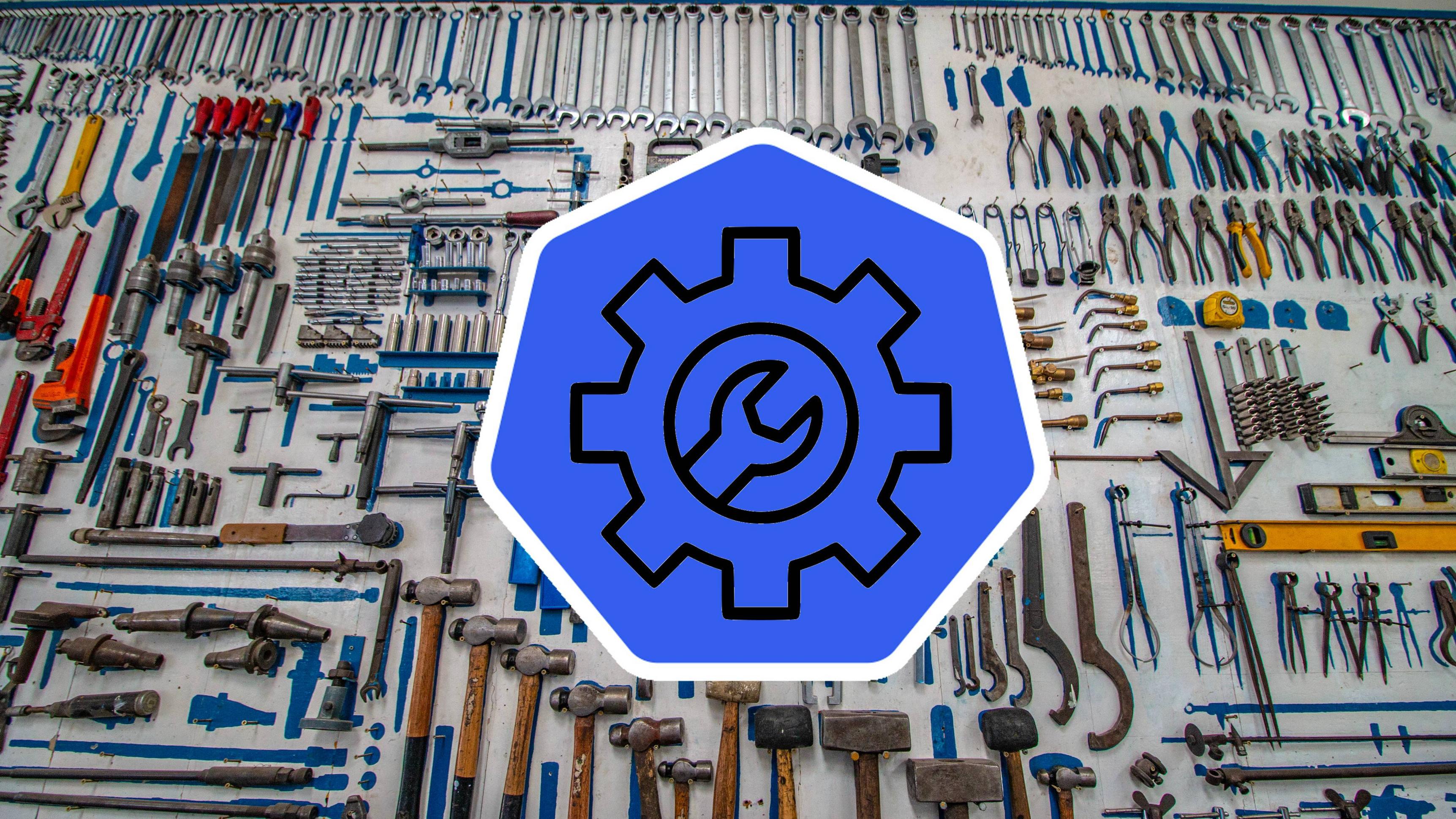 Networking with folks over at KubeCon can be super beneficial to you in several ways. Firstly, you could make some new friends, and learning partners, or you could find a potential employer. You can learn something new as well, or learn some new ways to use Kubernetes.

I already mentioned earlier in this blog how you can network. There is the hallway track, and sponsor booths, you can also network during the break period. Virtually you have the match and meet platform, and there are some networking sessions as well.

Getting opportunities directly ties in with networking. You can visit sponsor booths, and learn about what they do. You can then ask about their projects, how they work, what problems they solve, future plans, and so on, which will put you on their radar. If you have a skill set they are looking for, they will reach out to you with opportunities.

You can also contribute to their Open Source projects. Startups are always looking for new contributors and will be more than happy to help you get started and help you upskill.

Now you've got a fair idea about how you can make the most out of KubeCon. If you have not registered for KubeCon NA 2022, keep an eye out for KubeCon EU which will be in Amsterdam next year.

If you want to apply for a scholarship for KubeCon, keep an eye out for the scholarship applications.